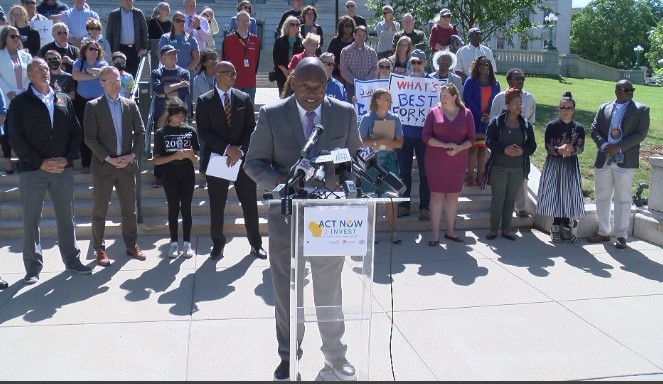 MADISON (WKOW) — School district leaders from across South Central Wisconsin gathered on the steps of the state Capitol Monday to decry lack of new general aid for public schools.

Last week, the GOP-controlled Joint Finance Committee put its last touches on the next two-year state budget. Republican members put about $400 million into the state’s school aid formula but because they did not raise property tax revenue limits, that money acts like a substitute, not a supplement.

With the state looking at a massive surplus following a $4.4 billion increase in projected tax collections, education officials said that, combined with federal relief money, provided a golden opportunity to make generational investments in schools.

“The combination of one-time federal funding and a state budget surplus affords our elected officials a once-in-a-generation opportunity to invest in the future of our children,” said Verona Area Superintendent Tremayne Clardy.

Republican lawmakers have said the federal money is a massive boost, enough to backfill pandemic-related costs and still allow for investments in the next two-year budget window.

“Our schools are fine,” said Sen. Mary Felzkowski (R-Tomahawk). “We have another budget coming up in two years and we will take a look at where everybody’s at at that time and then we’ll address the issues as they come forward.”

“This is a huge influx of cash to school districts and the guaranteed amount of new money has been known for months,” said Sen. Kathy Bernier (R-Chippewa Falls).

There had been questions about whether the initial GOP plan made the state eligible for the $2.3 billion in federal relief for schools. By beefing up the school aid formula, Republican lawmakers and the nonpartisan Legislative Fiscal Bureau believe the state is now in compliance with federal rules requiring states maintain previous levels of education spending.

Steinberg said merely maintaining past spending levels is not enough – not for districts that incurred unforeseen costs in making school possible during the pandemic and not when the state was sitting on billions of excess dollars.

“(The federal relief) was supposed to help us cover that deficit so that is going to be redirected somewhere else and now we’re in the hole for no reason,” Steinberg said. “We stayed open. We had our schools there. We taught children and now we’re being punished for that.”

Earlier in the budget process, the Joint Finance Committee approved $128 million in new funding for schools, with most of that covering a modest increase to the state’s reimbursement of schools for special education costs; the rate will increase from 28 percent to 30 percent under the GOP budget.

Down right here on earth, the ultra-rich proceed to evade taxes

Trusts, taxes and tips on how to plan lifetime items – Day by day...

How your NPS Tier II account withdrawals are taxed