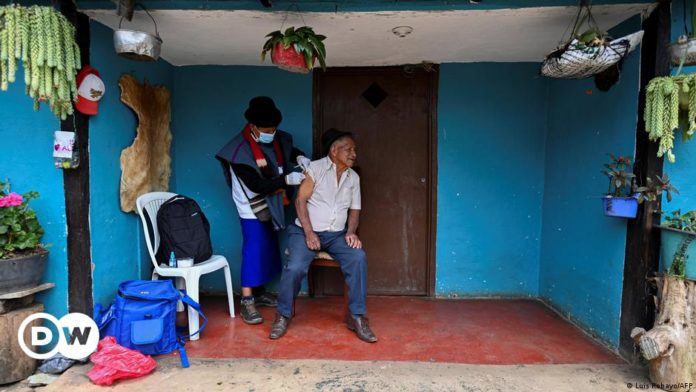 G20 countries are losing out on as much as $32 billion (€26 billion) a year in tax revenue from the globe’s five biggest tech companies, according to a study released Thursday by the human rights group ActionAid. These funds would cover the costs of two full-dose vaccinations against COVID-19 for every human being on the planet, the nongovernmental organization says.

“What is striking about the figures we are coming up with is just the scale of it; that they are so big and that we are looking, also now in times of COVID-19, at what that money could have done for public purposes around the world,” ActionAid’s global tax policy and program manager, Anders Dahlbeck, told DW.

The international NGO analyzed available tax information on Alphabet, Amazon, Apple, Facebook and Microsoft — five of the world’s largest tech companies — to show potential revenue that could be generated by a tax regime which more accurately reflects these companies’ global economic presence.

“At a time when governments are desperately looking for revenue to fund COVID-19 response expenses, not leveraging this potential tax resource is a missed opportunity,” the authors of the report wrote.

The report highlights how the rise of the digital economy has complicated corporate taxation practices. Most existing global tax rules were designed before the advent of the internet, the report says. A key difficulty posed by the digital economy is establishing where geographically a company’s profits should be taxed.

Big Tech companies like those examined in the report have users and customers all around the globe. But the structure of international corporate tax laws means that companies tend to pay taxes in the countries where they are headquartered. For most Big Tech companies, this means the global North, particularly in the United States.

Global tax frameworks have also spurred companies to seek out low-tax jurisdictions, such as Ireland or countries in the Caribbean. Tech companies often utilize legal loopholes that allow companies to book some of their profits there.

“Despite the fact that a lot of economic activity takes place in (countries in the Global South), it’s very hard for those countries to actually get any tax revenue out of these companies, based on the way that tax rules currently look,” said Dahlbeck. 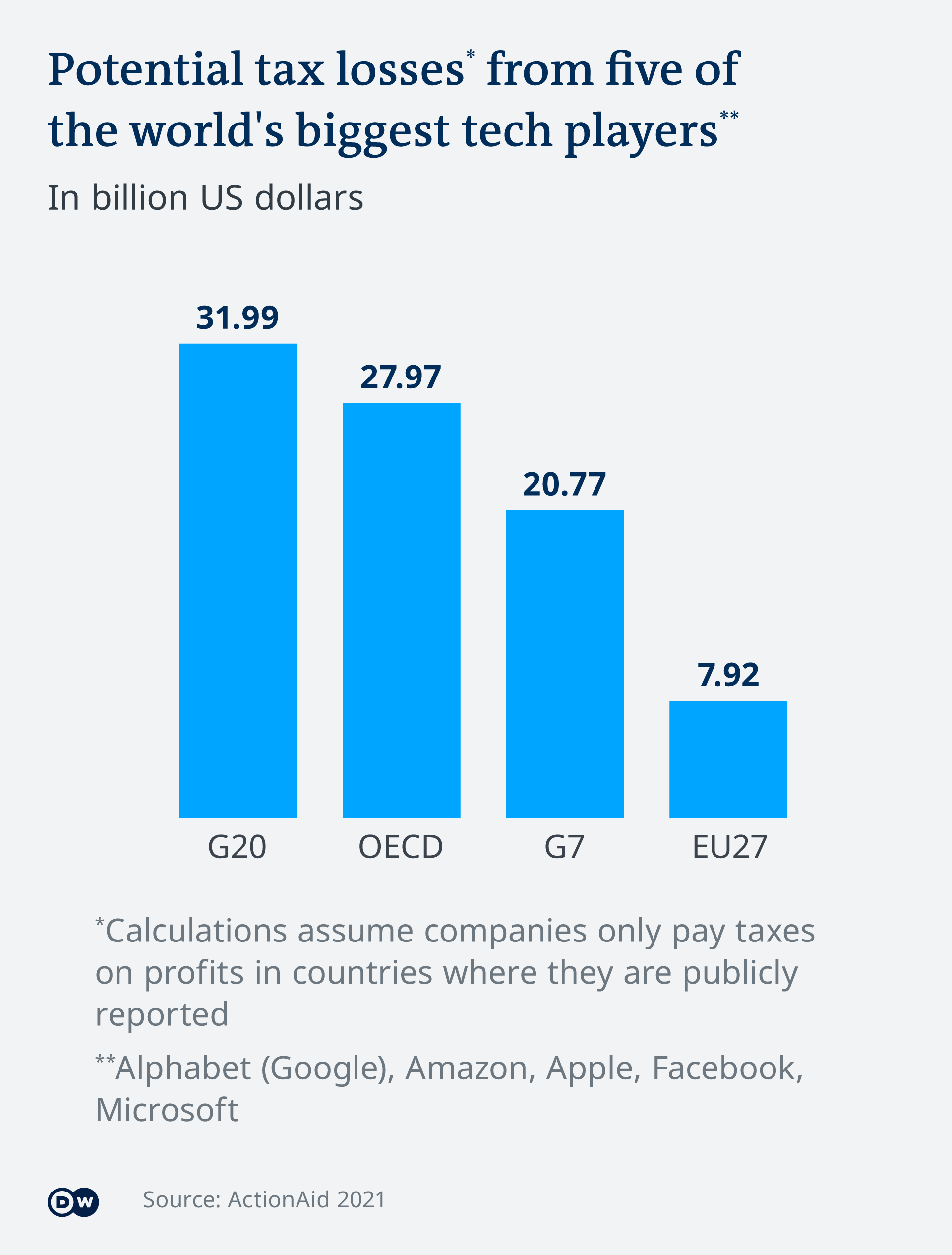 In a step toward finding a better solution, ActionAid’s report calls on governments to introduce a global minimum tax rate. The group proposes a corporate minimum tax rate of at least 25% that would apply equally to a company’s domestic and overseas profits.

Countries would remain free to set their own domestic tax rates. But a global minimum rate would require companies paying a rate below 25% in a foreign jurisdiction to pay a top up in the country where they are headquartered in order to reach the global minimum rate. A company headquartered in the US might pay a rate lower than 25% on profits booked in Ireland, for example, but under the proposed rule would have to pay the difference in a top up tax charged at its home base.

“It effectively takes away part of the incentive for companies to shift profits around because they would end up having to pay a top up tax anyway in their home jurisdiction,” says Dahlbeck. 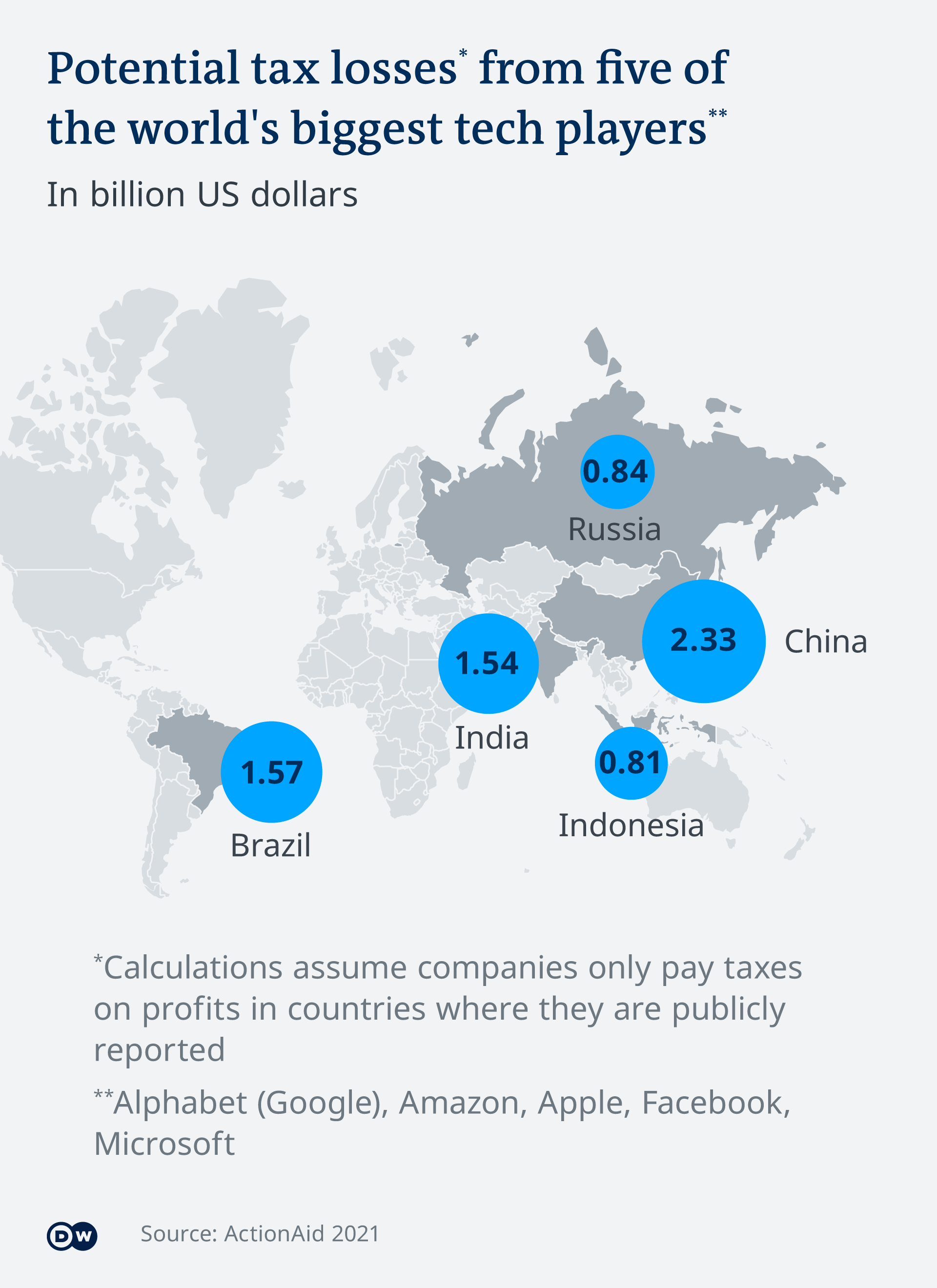 The report cautions that a global minimum tax rate is not a “silver bullet” for addressing the challenge of taxing the digital economy and raising additional tax revenue in developing countries.

“What it doesn’t do is change the distribution tax rates — meaning it doesn’t really change who has the right to tax a company’s income,” said Dahlbeck.

For this reason, ActionAid also calls for taxing rights to be based on where economic activity takes place, rather than where a company books their profits.

This could be achieved via a multilateral agreement, preferably negotiated via the United Nations, the group says. With a view to timeliness, however, ActionAid is calling on countries to introduce domestic tax measures to recoup funds needed to help with the COVID-19 pandemic recovery.

“Developing countries in particular, but also richer countries, need to act swiftly to ensure that companies in the digital economy pay their fair share of taxes in their jurisdictions,” the report says, “particularly in the context of the economic crisis triggered by COVID-19.”

ActionAid, which works to improve human rights and especially women’s rights, sees corporate tax law reform as a necessary step in creating a more equitable global society. Women rely more on a well-functioning public sector than men do, explained Dahlbeck. He pointed to the fact that, without an alternative public offering, women are often left caring for children, the elderly and the sick — work that is typically not paid.

“We believe that a well-functioning public sector funded by tax revenue, rather than by increasing amounts of debt or reliance on foreign aid, is a sustainable way to guarantee women’s rights and human rights,” said Dahlbeck.

The report comes a day before G20 leaders meet in Rome for a health summit to discuss the coronavirus pandemic and future global health security.

Last week, a European Union court overturned a European Commission ruling that would have seen online retailer Amazon pay $300 million in back taxes. In April, the US called for a global minimum tax rate and proposed raising its own corporate tax rate to 28%, up from 21%.

Canadian and U.S. Tax Legal guidelines: A Evaluation of 2020 and a Look Forward...