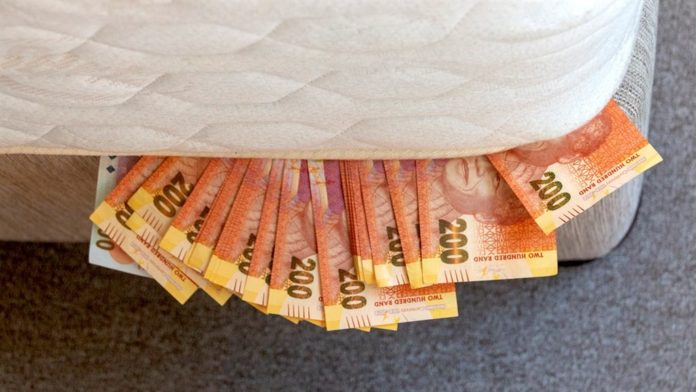 A sharp increase in tax payments from mines (thanks to booming raw material prices) and a faster-than-expected recovery in VAT have helped to spare South African taxpayers in the 2021 state budget announced by Finance Minister Tito Mboweni on Wednesday.

As the pandemic devastated the government's finances, the Treasury Department announced plans in October to increase taxes by R40 billion over the next three years.

These plans have now been abandoned after the state earned almost R 100 billion more in taxes than expected. This was due to an "increase" in taxes by miners as well as a recovery in consumer spending and wages in recent months, the Treasury Department said.

Monthly domestic VAT collections since August have been higher than before the 2019 pandemic.

Demand for tax deferrals and other tax relief measures offered to companies during the pandemic was also lower than expected. In the end, a tax break of only R 40 billion was granted – compared to a budgeted amount of R 70 billion.

The renewed crackdown by the SA Revenue Service against tax avoidance also brought in billions. The company received almost Rl 3 billion from 117 investigations and deployed new freight scanners in its customs and excise operations with which it was able to confiscate illegal imports worth Rl 1.5 billion.

While SA's tax revenue last year will still be 11% lower than 2019 – due in part to revenue from "sin taxes" halved due to alcohol and cigarette sales bans during the lockdown – the new tax proposals for 2021 are less severe than previously feared.

So taxes will change according to the 2021 budget.

The government increases the income tax brackets by an average of 5%, which is above inflation. This means that all individual taxpayers will pay less income tax in this tax year than in the previous year. Proportionally low wage earners receive more relief.

This adjustment will cut tax revenue by R2.2 billion, the Treasury Department said.

Here are the old and new brackets:

Here's how the Treasury Department calculates changes that affect different groups of taxpayers: Tax audit for the rich

In this upcoming fiscal year, SARS will set up its own unit to improve compliance by individuals with assets and complex financial arrangements, Mboweni said.

This first group of taxpayers has been identified – and is due to "receive a notice in April 2021".

The Treasury Department reaffirmed its intention to lower the South African corporate tax rate, which is 28% high compared to a global average of 23.6%.

In this year's budget it has now committed itself to lowering this tax rate "in the medium term", noting that "high tax rates reduce competitiveness and create an incentive to shift profits to lower tax areas".

The corporate income tax rate will be reduced to 27 percent for companies with years of assessment starting on or after April 1, 2022.

The VAT remains unchanged at 15%.

"Super fine" cornmeal has been added to the VAT zero-zero list.

The 11 cents per liter increase in the Road Accident Fund (RAF) levy (only 9 cents last year) was more than forecast, however.

All taxes now account for 39.7% of the total price of a liter of 93 gasoline and 44% diesel. However, this is a smaller proportion than last year when it was 42% and 46% respectively.

Excise taxes on alcohol and tobacco will rise by an average of 8% – twice the rate of inflation.

Here are some tax increases:

Fortified wine increases from R7.34 to R7.92 per liter

The traditional African beer, however, remains unchanged at 7.82c per liter.

The Treasury notes that the World Health Organization believes that at least 70% of cigarette prices should be used for state taxes. In South Africa the tax rate is still only 40% of the retail price. A WHO estimate from 2019 was also cited that SA's cigarettes were cheaper in 2018 than they were in 2008.

For vaping and other heated tobacco products, the excise tax rate (75% of the tax rate for a pack of cigarettes) remains unchanged.

Under Section 12J of the Income Tax Act, South Africans receive a tax break when their investments are made through an approved venture capital company. The idea behind it was to encourage investment in small businesses and riskier businesses that can help create jobs and economic growth.

However, the Treasury Department says this has not happened as often as it wanted and the program will end in June.

So far, bio-based plastic bags – for example made from sugar cane and food – have not been taxed.

But the government has now introduced a levy of 12.5 cents per bag, which states that while they “emit less greenhouse gases, they still contribute to litter and marine pollution”. Plastic bags are currently taxed at 25 cents per bag.

SARS has decided to review the tax rules for traveling and working from home.

“Given the large-scale migration to work from home last year, the Treasury Department will review the current travel and home office allowances to examine their effectiveness, equality of application, ease of use, safety for taxpayers and compatibility with environmental goals .

The consultations will start next year.

Receive a daily news update on your phone. Or email the best of our website to you

Go to the Business Insider homepage for more stories.

What’s it like promoting Derek Jeter’s Tampa home whereas Tom Brady lives in it?

‘I assist it’ – Orange County Register