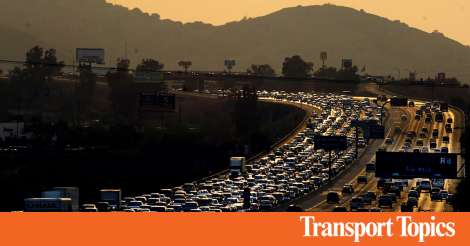 (Stay on top of transportation news: Get TTNews in your inbox.)

Four years after the California Legislature boosted the gas tax in order to fix the state’s crumbling roads and bridges, California has spent billions and made some progress in repairs, but officials now say the funding is sufficient to complete less than half of the work needed.

The gas tax has been a political hot potato since it was passed in 2017, resulting in the recall of a Democratic state senator who voted for the legislation and an unsuccessful attempt by Republicans in 2018 to ask voters to repeal the higher charges.

Now, with the gas tax set to increase again July 1, the campaign to fix roads and bridges is again stirring contention, drawing criticism from some lawmakers who say repairs have been too slow and the effort has lagged behind other states in maintaining and improving transportation systems.

The program to fix roads has been hampered by California’s high cost of repairs compared with other states and by the COVID-19 pandemic, which resulted in less driving and therefore hundreds of millions of fewer gas-tax dollars than expected. In addition, with people driving more electric and fuel-efficient cars, state officials are studying ways to make up for the loss of gas tax revenue, possibly with fees tied to miles driven.

But despite the challenges, Democratic leaders who supported increasing the gas tax say it has been worthwhile and progress is being made.

“The reality is that infrastructure repair was underfunded for decades and that neglect had no instant solution,” said Assembly Speaker Anthony Rendon (D-Lakewood), a leading supporter of the tax increase. “If we agree that we want improvements for our transportation system, we have to pay for them, and the gas tax made the most sense as the way to do that.”

The state has allocated about $16 billion in gas taxes and vehicle fees generated by Senate Bill 1, legislation signed into law in April 2017 by then-Gov. Jerry Brown with the promise of improving the state’s transportation systems after years of neglect.

Gov. Gavin Newsom recently touted the money made available from the gas tax as a significant boost to efforts to repair and maintain the state’s roads and bridges.

“We are in a position that we haven’t been in many, many years with sustainable funding,” Newsom said last month in Big Sur, where he presided over the reopening of a stretch of Highway 1 that had been washed out by a mudslide in January.

Newsom at a news conference for the reopening of California’s Highway 1 near Big Sur, Calif. (Nick Coury/Associated Press)

Under SB 1, the gas tax increased 12 cents per gallon on Nov. 1, 2017, jumped an additional 5.6 cents a gallon on July 1, 2019, and 3.2 cents last July 1 — bringing the total state levy to 50.5 cents per gallon. California’s total state taxes and other charges on gasoline are the highest in the country, according to the Tax Foundation, based in Washington.

The California excise tax on gas will automatically rise again to 51.1 cents per gallon on July 1 to account for inflation.

SB 1 also increased the excise and sales taxes on diesel fuel and created an annual vehicle fee that ranges up to $175 for cars worth $60,000 or more.

The state expects SB 1 to generate more than $5 billion annually during the first decade of implementation, but the various taxes and fees have been phasing in over the first few years.

However, state officials say that much more money is needed to address shortcomings in the transportation system. Caltrans estimates it will need $122.9 billion over 10 years “to maintain the existing assets” due in part to increasing costs and the age of the infrastructure.

“Considering these expanding needs, the available funding will address about 45% of the total identified needs,” Caltrans said in a report sent to the California Transportation Commission.

The new calculation includes factors that were not included when SB 1 was approved, including higher than anticipated costs and the impact of climate change on problems, including sea level rise. Even in 2017, Caltrans officials thought SB 1 would not fully meet transportation needs, but the shortfall has grown significantly.

The new report has drawn criticism from some lawmakers, including state Sen. Patricia Bates (R-Laguna Niguel), vice chairwoman of the Senate Transportation Committee.

“It’s an insult to California’s drivers to force them to pay the nation’s highest gas taxes and then say it’s not enough, especially at a time when Sacramento is supposedly enjoying a budget surplus,” Bates said.

Rocco said that the “department is making steady progress on the goals established by the legislation four years ago and remains on track to meet statutory benchmarks with the current level of SB 1 funding.”

Newsom has proposed adding $2 billion for road and bridge projects statewide during the next seven years, with some additional funds for transportation projects needed for Los Angeles to host the 2028 Olympics. But even with the new money, state coffers still will have less than half the funds needed to address all of the transportation needs.

“SB 1 has made a significant difference in our roadway conditions in recent years — prior to it passing, our state highways and local roads faced a huge backlog of deferred maintenance,” said Senate President Pro Tem Toni Atkins (D-San Diego).

But some transportation experts say California’s roads are in greater disrepair than the state claims, particularly when compared with other states.

A report by Los Angeles-based libertarian think tank the Reason Foundation in November estimated that 28.5% of California’s urban arterial pavement was in poor condition as of the start of last year, which placed California 48th in the country, where the national average is 12.06%. The report, based on road condition data in 2018 reported by states to the Federal Highway Administration, ranks only Rhode Island and Wyoming lower than California.

“I would have expected to see a little bit more improvement in the pavement quality, and we just have not seen that,” said Baruch Feigenbaum, senior managing director of transportation policy at Reason Foundation.

Feigenbaum said one reason California is doing so poorly is that higher costs and more generous labor laws mean it spends more on repairs than many states.

“It takes a lot of money to maintain a roadway in California, more than it should,” he said.

The Reason Foundation report said the average per-mile disbursement for maintenance nationally was $15,952 in 2018, about half of what it was in California.

But Caltrans says its spending is lower than the national average when vehicle miles traveled are factored in, noting that California’s roads are busier than those of most states.

Improvement has also been slow in fixing the state’s bridges.

That number is up from 1,204 bridges, or 4.7% of all bridges, classified as structurally deficient in 2016 before the gas tax increase, according to an analysis released last month by the American Road and Transportation Builders Association.

The number of California bridges in “good” condition declined from 16,788 in the year before the gas tax legislation to 12,898 last year.

The Reason Foundation found California ranked behind 18 other states in 2019 on the percentage of structurally deficient bridges.

Caltrans notes the federal numbers include thousands of bridges maintained by local governments.

Next-level technologies hold the potential to enhance safety and efficiency in transportation, but it takes a lot of work behind the scenes to advance these ideas from concept to reality. We talk with Christoph Mertz of the Robotics Institute at Carnegie Mellon and Huei Peng of the University of Michigan. Hear a snippet above, and get the full program by going to RoadSigns.TTNews.com.

When SB 1 was approved, state officials said they had been fixing an average of 114 bridges in the state’s jurisdiction per year and hoped to add 500 bridges to that tally over 10 years, or 50 per year.

The agency says it has repaired 635 bridges in the last three years, with an average of 211 bridges annually, well above the initial goal.

Still, Republican lawmakers who opposed the tax increase said the state has fallen short of delivering what Californians expected.

“Taxpayers have done their part, but Sacramento is not upholding their end of the deal and not getting the job done,” said Assemblyman Vince Fong (R-Bakersfield), vice chair of the Assembly Transportation Committee.

“California’s onerous and costly regulations make it impossible to build or fix things quickly and cost- effectively, which means taxpayers are paying more and getting less and less in return.”

Funding for road and bridge repairs has been affected since March 2020 by the pandemic, which forced many people to work from home. The governor’s new budget notes that the fuel excise tax revenues used to fund transportation projects are expected to be lower than pre-pandemic forecasts by a total of $1.5 billion through the next four years.

“The COVID-19 pandemic has led to dramatic reductions in travel across the country and the state,” the budget states.

But some help is coming: California is expected to get $900 million from the recently approved federal COVID-19 relief bill, and could see much more from a $1.7 trillion infrastructure plan proposed by President Biden.

“It gives you an indication that we are uniquely positioned to get matching dollars and to get federal appropriations the likes of which arguably we haven’t seen in our lifetimes,” Newsom said at the Big Sur news conference.

Based on California’s historical share of federal transportation funds, the state is likely to get just enough to cover about 17% of the more than $61 billion shortfall in funds identified by the new Caltrans report.

The long-term outlook for revenue from the gas tax is made even more uncertain as more people shift to electric cars, hybrids and other vehicles that get better gas mileage.

Caltrans is studying alternatives to the gas tax to fund transportation infrastructure, including the possibility of charging motorists per-mileage fees so that drivers contribute based on how much they use the road, officials said.

In January, Caltrans launched a test program to study the potential of using various technologies for road charge collection, and in March the Federal Highway Administration awarded Caltrans a grant to test the ability of GPS systems to differentiate between public and private roads.

“As the state looks toward a zero-emission future, California needs to study alternatives to the gas tax to fund our transportation infrastructure,” said Caltrans Director Toks Omishakin.

This month, the state Senate Transportation Committee approved legislation by state Sen. Scott Wiener (D-San Francisco) that would allow the state to expand its study by collecting a road user charge based on vehicle miles traveled from volunteers participating in the research.

“We must eventually phase out gas cars entirely to combat climate change, so we need to prepare now for an alternative source of funding for our critical infrastructure.”

The forecast for presidency revenues is rosier than anticipated

Biden plans to construct a military of IRS brokers and ship them after massive...