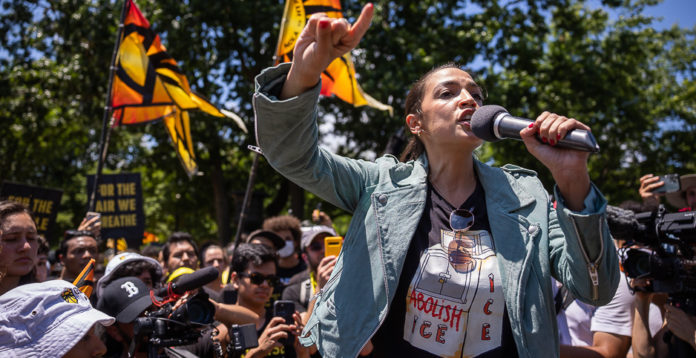 Democrats are embarking on one of the most ambitious, expensive and complicated legislative endeavors in history, looking to cram much of President Biden’s agenda into the upcoming infrastructure package — or packages.

While there’s general agreement between Democrats and the White House on the need to reduce greenhouse gas emissions, finding agreement on a suite of policies to do so remains one of the key challenges on Capitol Hill, where a 50-50 Senate and razor-thin House majority will leave little room for error.

Compounding the push is last week’s bipartisan agreement between 21 senators and Biden, which includes billions of dollars for climate resiliency and electric vehicle charging stations, as well as low-emission buses, but at far lower levels than envisioned in the White House’s $2.3 trillion infrastructure blueprint released in March.

The deal — which will also include major components of the Senate’s surface transportation reauthorization bill as well as a $35 billion water infrastructure bill that already passed the chamber in April — caught even top committee chairs off guard. They are now grappling with questions over the two-track process that Democratic leaders are pushing.

“I think the question in the Senate is, how are all of these pieces going to move forward?” Finance Chair Ron Wyden (D-Ore.) said in an interview last week when asked how he plans to fund the bipartisan deal and the highway bill — separate pushes that are now intertwined after Biden backed the bipartisan framework.

Pressed on how his committee’s ambitious climate goals make it into law, House Energy and Commerce Chair Frank Pallone (D-N.J.) said he’s looking at an array of options, including breaking out components into separate bills placed on the suspension calendar, the appropriations process, as well as the budget reconciliation bill that would allow the package to pass the Senate by a simple majority.

In a sign of the hurdles ahead, the White House went into cleanup mode over the weekend after Republicans balked at the president’s suggestion that he would not sign the deal unless Congress also sends him a reconciliation bill.

Pressed on the dust-up yesterday, White House spokesperson Jen Psaki made clear the procedural machinations are up to Democratic leaders.

“Certainly we’re working in close coordination with leaders in Congress, but it’s up to them to determine the sequencing of the legislation,” she said.

While the legislative strategy remains very much a work in progress, key decisions loom that will be crucial to winning enough support to get anything into law.

Here are a few areas to watch in the weeks and months ahead:

Climate change remains the 800-pound gorilla in the room, and progressives ramped up the pressure yesterday, further muddying the water on the bipartisan deal.

Progressives see the infrastructure negotiations as the best shot to pass generational policy to stem greenhouse gas emissions, and whether they can reach agreement on the issue with the White House and Democratic moderates will determine the path forward.

The Sunrise Movement kicked up the debate, gathering activists outside the White House yesterday to protest the lack of climate policy in the bipartisan deal. At least a dozen protesters were arrested after the crowd attempted to block all entrances to the White House.

Joining the crowd were prominent progressive lawmakers like Reps. Alexandria Ocasio-Cortez (D-N.Y.) and Cori Bush (D-Mo.), a potential sign of trouble in the closely divided House.

Progressive were broadly disappointed by the EV and resilience policies laid out by the bipartisan group, despite pledges from Democratic leadership that climate would be addressed in reconciliation.

Psaki attempted to push back on those concerns yesterday. “I would dispute the notion that it doesn’t do anything for climate, which some are arguing,” Psaki told reporters, adding that Biden considers the bipartisan deal “a down payment” on climate.

But she also hedged on whether Biden wants to see a clean electricity standard as part of the reconciliation effort.

“There is obviously a lot to be negotiated and discussed moving forward,” Psaki said when asked about a CES. “The president has conveyed that he would like to see an investment in clean energy tax credits, something that would certainly be an additional step forward, and there’s more to discuss as it relates to the final reconciliation package.”

Those comments stand in stark contrast to progressives on the Hill, who see a CES as a crucial component of the reconciliation package (E&E Daily, June 25).

Rep. Scott Peters (D-Calif.), a moderate who has staked out ground on energy and climate policy, last week warned about digging in too deeply on must-have provisions.

“You’ve got to be careful about taking positions that wipe out any progress,” he said in an interview. “We’re a lot better off getting 60% of what we want than getting 100% of nothing.”

Paying for infrastructure has dogged Biden’s push from the start and will continue to be a major headache for the two-track process going forward.

The White House has balked at user fees, rejecting the traditional means of paying for surface transportation legislation. Republicans in turn have rejected Biden’s proposal to hike corporate tax rates lowered in the 2017 tax law, leading to their omission in the bipartisan framework — despite broad support among Democrats for higher taxes.

The bipartisan framework eschews both user fees and corporate tax hikes, relying instead on an assortment of revenue-raisers, including selling oil from the federal Strategic Petroleum Reserve and reinstating the expired Superfund fees.

How that deal on pay-fors applies to the surface transportation measures that are expected to hitch a ride on a bipartisan infrastructure package remains unclear. Wyden, as Finance Committee chair, has made clear that he believes wealthy taxpayers and corporations should foot the bill.

Wyden told E&E News last week that discussions are underway on a range of options for paying for whatever bipartisan infrastructure bill emerges on the floor.

“We will have revenue proposals that allow the Senate Democratic Caucus to make decisions about paying for the priorities that we think are important and also have the prospect of getting support across the aisle,” he said.

Sen. Ben Cardin (D-Md.), a senior member of the Environment & Public Works and Finance committees, said last week it was unclear how the pay-for question would be resolved.

Resolving pay-fors also requires appeasing Democrats from across the political spectrum. For instance, Senate Budget Chair Bernie Sanders (I-Vt.) recently suggested that as much as $3 trillion in the reconciliation package he’s planning should simply be added to the deficit, citing historically low interest rates.

The House punted on the issue of pay-fors in the massive highway and water bill that’s coming to the floor, but moderate Democrats have made clear they won’t drop the issue.

“Making sure that stuff is paid for is a general issue for a lot of moderates, including me,” Peters said last week.

The Kentucky Republican put out a statement yesterday applauding Biden for delinking the bipartisan package and the upcoming reconciliation bill but called on the president to convince Speaker Nancy Pelosi (D-Calif.) and Senate Majority Leader Chuck Schumer (D-N.Y.) to “follow his lead” and not let Democrats “hold a bipartisan bill hostage over a separate and partisan process.”

“Unless Leader Schumer and Speaker Pelosi walk-back their threats that they will refuse to send the president a bipartisan infrastructure bill unless they also separately pass trillions of dollars for unrelated tax hikes, wasteful spending, and Green New Deal socialism, then President Biden’s walk-back of his veto threat would be a hollow gesture,” McConnell said.

That suggests there’s still room for mischief on the part of Republicans, whom Democrats are wary of after lengthy negotiations on health care under President Obama consumed months, leaving less time for other legislative priorities, including climate change.

“Given the difficulty at the Senate side, I think we need to do the maximum we have to negotiate,” Grijalva said in an interview, citing the Senate’s failed push to pass the House’s sweeping voting rights bill seen by Democrats as crucial to combating voting restrictions imposed in GOP-led states.

Said Grijalva: “I anticipate that we’re going to run into the same buzz saw over there that we ran into with voting rights and other things, and that our best efforts are still going to meet resistance there. And we have to be in a position to say these are our priorities.”

MDC Companions Inc. broadcasts that adjustments and waivers to the Notes are efficient

In line with official info, Sunak is meant to delay the choice on the...

Senator Warren says lawmakers handed a number of payments this 12 months that may...