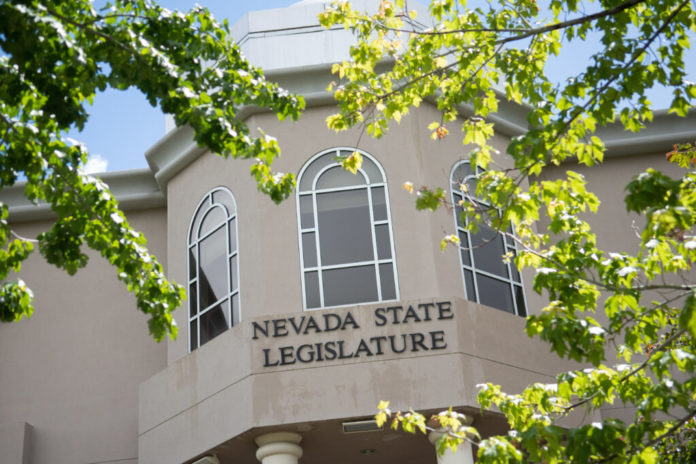 A major bill, aimed at directing about $500 million in mining revenue and federal aid to public education and staving off politically perilous 2022 ballot questions, began its race against the legislative clock late Sunday with a broad coalition of mining interests, progressive advocates and the Clark County teacher’s union on board.

The bill, AB495, was heard in a joint Senate-Assembly budget meeting on Sunday evening ahead of a crucial legislative period — the 120-day session ends Monday, May 31, at midnight, and the bill must still clear the Assembly and Senate with a two-thirds majority vote, requiring at least some Republican buy-in. The bill passed out of the Assembly Ways and Means committee late Sunday on a party-line vote.

The bill is much more than just a tax increase. In addition to creating a new excise tax on gold and silver mine total revenue above $20 million — a provision that is estimated to bring in between $150 to $170 million over the biennium — the bill redirects existing mining taxes to education alone. It also allocates $200 million in federal funds to address learning loss, makes changes to Medicaid and restores funding to a private school scholarship program supported by private donations made in exchange for tax credits.

Assembly Speaker Jason Frierson (D-Las Vegas) framed the bill as the product of compromise between divergent interests, saying that many provisions had left those involved “holding their nose and nodding their head.”

“This is, I believe, a reflection of collaboration that in my career has seldom been seen,” Frierson said.
Presenting the bill alongside Frierson was Nevada Mining Association President Tyre Gray, and a representative from the largest player in the mining industry — Nevada Gold Mines — also testified in support.

“Mining is a willing payer to achieve these goals,” Gray said. “Though mining alone cannot solve the structural fiscal and funding issues of the state of Nevada, it is within our DNA to be first at the table and be part of the solution.”

Also at the table was Clark County Education Association Executive Director John Vellardita, whose presence has implicit election implications. Frierson said passage of the bill would result in lawmakers not advancing any of the three proposed mining constitutional amendments approved in the 2020 special session, and the teacher’s union is expected to withdraw its 2022 ballot petitions aimed at increasing gaming and sales taxes if the legislation passes.

Vellardita said earlier this spring that the union wasn’t “wed” to its ballot measures and would embrace an alternative if “it satisfies what we think needs to be done,” although he didn’t name a number at that time. At the hearing, Vellardita referred to his union’s effort to “force a conversation around investing” and lauded the bill as a historic investment in base per-pupil funding.

“I think the most significant thing that’s out of this piece of legislation is a dedicated funding stream for K-12. Is it enough? No, but it’s a start,” Vellardita said at the hearing.

The new tax envisioned by the bill is an excise tax levied on gross revenue of gold and silver mines in the state. The rates would be set at 0.75 percent on revenue above $20 million and up to $150 million a year, and at a 1.1 percent rate for any revenue above $150 million.

The bill also allows for deductions — including for proceeds deriving from federal land that is also a military base — and sets a calculation for determining gross receipts, which is similar in structure to the one related to Nevada’s Commerce Tax (a levy on annual revenue over $4 million that was approved in 2015).

In a diversion of an existing tax revenue stream, the bill directs money from the net proceeds of minerals tax to the state education fund rather than the general fund. Vellardita acknowledged it was possible lawmakers could use the mining money to supplant existing general fund contributions to education, but said lawmakers would face pressure not to do that from voters who expect meaningful improvement in schools.

And in a likely nod to needed Republican support, the bill will also add back $4.745 million in tax credits for the Opportunity Scholarship program, which provides private school tuition grants to eligible low-income children but is fiercely opposed by many progressive groups who see it as sapping money from traditional public schools. The program, which serves just over 1,000 students, was severely curtailed in the 2019 Legislature and closed to new enrollees — Frierson at the time argued that an annual 10 percent growth factor built into the program would quickly build to “simply unsustainable” levels.

During the hearing on Sunday, Frierson said the number of students in the program had “dropped off significantly faster than I think we anticipated last session, and so we are now within the parameters of that program.” He characterized the bill not as an expansion of the program, but as maintenance of 2019 levels.

The legislation would also direct the Commission on School Funding to explore new options for public education revenue. A report from the commission that was released last month suggested sales tax and property tax as the best mechanisms, but Frierson opposes altering the sales tax, and he said he didn’t want to “presuppose” what the commission might recommend based on AB495’s directive.

“This bill is the beginning of a conversation and we are not going to stop calling for stable funding for education in this state,” Frierson said.

In the meantime, the bill also calls for the appropriation of $200 million in federal COVID relief funds for COVID-related learning loss programs for school districts, including tutoring, summer school programs, extended learning and enrichment programs and support for at-risk students. The bill includes charter schools as a potential recipient of the funds, but Frierson said they would be removed in an amendment.

Another planned amendment to the bill will also charge the commission with exploring the issue of school board composition — a subject Frierson and other lawmakers have championed in efforts to make more school board members appointed.

Additionally, the bill appropriates $600,000 per year to the Silver State Opportunity Grant Program — the state-supported needs-based financial aid program. That allocation would restore funding to levels approved in 2019.

Another section would include aspects of Republican Senate Minority Leader James Settelmeyer’s legislation authorizing Medicaid reimbursement for personal care services. Frierson said that language was “something that I think collectively, folks thought was worthwhile as being a part of this package.”

Progressive supporters of the bill highlighted the need to fund education in Nevada, praising the measure as a necessary step toward helping students succeed, but lamented that lawmakers did not consider AJR1, proposed during the special session.

“While we maintain that AJR1 from the 32nd special session would have been the ideal solution to raising revenue this session,” said PLAN lobbyist Christine Saunders. “This deal is a start to addressing the privileged position mining has held in Nevada’s tax code until now.”

Amanda Hilton, the general manager of Robinson Nevada Mine, a copper mine operating out of White Pine County, choked up as she testified in support of the measure. She said that the bill will not only enhance the industry’s investment in education, but it will also protect the economic vitality of Eastern Nevada.

“I sit here before you today representing the 600 miners at Robinson and my White Pine County community,” Hilton said. “This legislation will keep our miners working within the economic engine of our community.”

Brian Mason, the vice-chairman of the Shoshone-Paiute tribe, was the only caller in opposition. He said that he was “disappointed” that tribes were not included in the discussion and that state dollars should be allocated to help “poverty stricken” reservation communities. The Nevada Republican Party also submitted a letter in opposition.

If the measure fails to advance, the electoral consequences will be felt on the 2022 ballot. Frierson has vowed to advance one of the proposed mining tax resolutions if the deal falls through, and Vellardita said after the hearing that the teacher’s union was prepared to spend up to $10 million in the 2022 cycle to try to pass the gaming and sales tax initiatives — estimated at one point to raise a combined $1.4 billion.

Vellardita said he was optimistic about the bill’s chances — saying it represented significant compromises on all sides, while noting the union’s initial funding ask from the mining industry was closer to $400 million over the biennium. Despite that, he said the potential for things to go haywire over the final hours of the session remained high.

“The shit drops, it’s anybody’s game,” he said in an interview. “Everybody that is potentially the deciding vote has a self-inflated view of value, and they try to trade it. And that’s what you’re seeing right now. So do I think it’s there? Do I think it’s possible? Absolutely.”

Tabitha Mueller, Riley Snyder and Michelle Rindels are staff writers for The Nevada Independent, a 501(c)3 nonprofit news organization. The following people or entities mentioned in this article are financial supporters: Amanda Hilton – $480.00; and Nevada Mining Association – $21,500.00. This story was first published May 30 and is republished here with permission. For more Nevada news, including wall-to-wall reporting on the Legislature, visit The Nevada Independent.

Adjustments to the gas tax charge in 12 states

Idaho college boards say it is time for lawmakers to approve impression charges for...