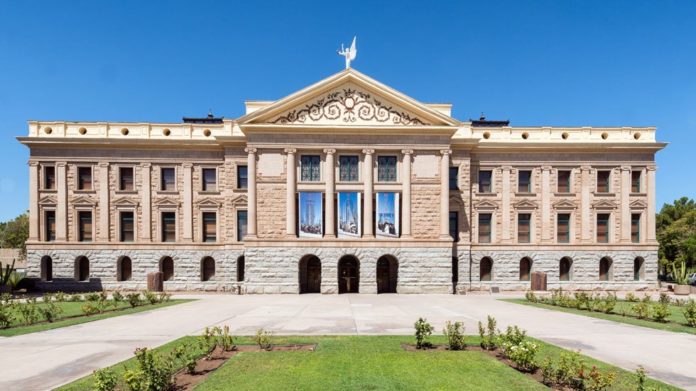 PHOENIX — In the chaotic race to finalize a nearly $40 billion state budget, Arizona Republicans are moving to reverse a voter-approved ballot measure that would impose special excise taxes on the wealthy.

They’re also trying to undermine the Secretary of State’s authority to administer and defend elections.

The two amendments — both stirring controversy in the state House and Senate this week — are of vastly different scales.

The proposed flat tax that would undercut the excise tax on individuals making more than $250,000 a year, or couples who make more than $500,000 annually, would overhaul how Arizona taxes its citizens. The amendment shifting authority to handle legal challenges from a secretary of state to the state attorney general seems minor by comparison.

But the two measures are part of an emerging trend in Republican-dominated state legislatures across the country, and they’re raising questions about what happens when a party that loses an election refuses to honor the will of the voters.

After recent election losses at the state level, Republican legislatures have moved to restrict the power of the voters who delivered those defeats, either by limiting access to the polls, curtailing the authority of the incoming party or by ignoring the results of direct initiatives.

In Arizona, Republicans admit they see the excise tax, created by the voter-approved Proposition 208 last year, as a barrier to competition with other states for new businesses and taxpayers.

“We’re addressing the (Proposition) 208 problem, we’re dropping the overall tax rate,” state House Majority Leader Ben Toma (R) said in an interview. “We wanted to make sure it’s a tax cut for everyone.”

The amendment to change authority over election litigation takes power away from Secretary of State Katie Hobbs, a Democrat, and hands it to Attorney General Mark Brnovich, a Republican.

“This is about politics and retribution,” said state Rep. Raquel Teran (D), who is also chair of the Arizona Democratic Party. “They are disregarding the will of the voters, and there’s no other way of putting it than power grabs.”

Georgia legislators became the first of a handful of states to pass a sweeping package of election law reforms this year, after President Biden

Voters in Georgia will now have less time to request an absentee ballot and less access to mobile voting centers, while volunteers will not be allowed to pass out food and water to those waiting in line, a practice that often takes place in minority precincts where long lines are more likely than in majority white precincts. Critically, the package signed into law by Gov. Brian Kemp

Republican officials and activists in both Wisconsin and Georgia have taken steps in recent days to emulate Arizona, where the GOP-controlled state Senate is conducting what it calls an audit of more than 2.1 million ballots cast last year in Maricopa County. That audit, based on former President Trump

Donald TrumpPaul Ryan: Voters won’t be impressed by ‘yes-men and flatterers flocking to Mar-a-Lago’ Murkowski voices frustration with GOP over Jan. 6 commission: ‘Something bad happened’ Intelligence told White House they have unexamined evidence on coronavirus origins: report MORE’s continued unproven allegations of widespread improprieties in the 2020 elections, has been castigated by election administration experts and even fellow Republican elected officials as deeply flawed.

“Politicians have always used political reform to write the rules to win the game. What’s new in these moves is that they’re changing who the umpires are,” said Thad Kousser, who chairs the political science department at the University of California-San Diego. “It’s a way to inoculate yourself against any outcome. If we didn’t set the rules right, we’ll still be in control of the umpire.”

Other states are disregarding the will of voters more directly.

In Missouri, Gov. Mike Parson (R) has abandoned a bid to fund Medicaid expansion after lawmakers refused to fund additional coverage for those making less than 138 percent of the federal poverty limit. A majority of state voters passed the expansion, authorized under the 2010 Affordable Care Act, in a November ballot measure.

That follows efforts in Florida in recent years to roll back constitutional amendments passed by more than 60 percent of its voters.

One of those amendments — creating an independent panel to oversee redistricting every decade — survived a legal challenge after the legislature attempted to draw its own lines. Another, which would restore the franchise of former felons, was amended by the legislature: Those who want to win back their right to vote must first pay court fees or fines.

The Republican hold on power is a legacy of the party’s electoral sweep in the 2010 midterm elections, under then-President Obama. While Democrats have been able to claw back ground they lost in the U.S. House and Senate, and even in governorships, they have never returned to similar power in state legislative chambers they lost that year.

Following what Obama dubbed the “shellacking” of 2010, Republicans held control of 58 chambers, and total control in 25 states. And their power has only grown. Today, they control both chambers in 29 states, and 60 chambers overall.

Democrats say many of those legislatures are out of reach because of hyper-partisan gerrymandering that has left their party deep in the minority. Indeed, in a state like Wisconsin, Democratic candidates for state Assembly seats won 53 percent of the vote in 2018, but only 36 out of 99 seats.

Democrats are not immune to their own gerrymandering: A Democratic draft of Illinois state House maps released last week would have lumped several Republican legislators into unwinnable districts or pitted them against fellow incumbents.

But the growing geographical division between Democratic and Republican partisans is becoming its own unbridgeable chasm.

Democratic voters in a state like Wisconsin are heavily concentrated in a few urban areas — Milwaukee, Madison, Racine, Kenosha and other liberal enclaves. The same is true in Arizona — Phoenix, Tucson and Flagstaff — and Georgia, with Democratic strongholds in Atlanta, Columbus and Augusta.

“Where you’re disadvantaged is where your voters are packed together,” Kousser said.

While a different cartographer may have drawn a more favorable map for Democrats, it is difficult to imagine district boundaries that would overcome the Republican advantage in Wisconsin, where Democrats would need to pick up 11 more seats to control the state Assembly, or Georgia, where they would need another 13. Even with maps drawn more favorably for Democrats, Republican legislative candidates won more total votes in 2020 than did Democratic candidates.

In Arizona, Republicans continue to claim a narrow majority of one seat in both the House and Senate under maps drawn a decade ago by an independent commission.

In years past, campaign season came and went, and the party that captured control of the state legislature would work alongside those who won executive offices, regardless of partisan affiliation. Those days are gone, replaced by new rules that allow a legislature to change a statewide official’s job description in the middle of his or her tenure, or to wholly circumvent the will of the voters.

Today, the status quo favors Republicans. But Democrats warn that might not always be the case.

“Change takes time,” Teran said. “And we’ve been working on change for a long time.”

On The Trail is a reported column by Reid Wilson, primarily focused on elections.