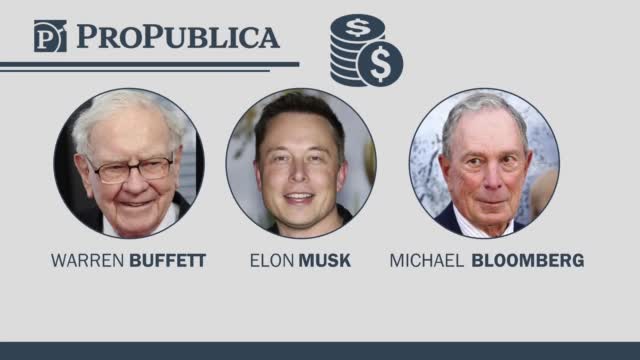 The U.S. tax system is designed to be progressive, meaning that the wealthiest citizens pay a greater share of their income than the less fortunate. But a new ProPublica analysis of tax data on some of the nation’s richest Americans comes to the conclusion that the richest 25 people in the U.S. have a “true tax rate” of almost nothing.

The study, published Tuesday, relies on a “vast trove” of IRS data that was given to the news service without “conditions or conclusions.” ProPublica said that it would not disclose the source of the data, and added that it verified the information by comparing it with publicly available details, such as from court documents and financial disclosures, as well as vetting information with the people whose tax information was disclosed.

The findings arrive at a crucial time in the national discourse on wealth and the fairness of the U.S. tax system. Prior to the pandemic, the 2017 Tax Cuts and Jobs Act slashed tax rates for the wealthy and corporations, setting up a dynamic that effectively snowballed the nation’s already widening income inequality. With the pandemic’s outsized hit to low-income families — especially people of color and women — President Biden is calling for higher taxes on the rich to help shore up the fortunes of poor and middle-class families.

The ProPublica report focuses on what it calls the “true tax rate,” which it defines as how much in taxes were paid by the wealthiest Americans annually versus the estimated growth in their wealth during that time. For instance, Amazon CEO Jeff Bezos paid $1.4 billion in personal federal taxes between 2006 to 2018 on $6.5 billion he reported in income, while his wealth increased by $127 billion during that same period. By ProPublica’s calculation, that reflects a true tax rate of 1.1%.

But some tax experts noted that the analysis compares what they say are apples to oranges: income versus wealth. The IRS collects taxes on earned income and income received through stock sales, dividends and other income provided by investments — it doesn’t levy taxes on unrealized gains or the paper value of a person’s assets.

“It’s a little unfair to calculate the fairness element based on total net worth,” Mark Steber, Jackson Hewitt’s chief tax information officer, told CBS MoneyWatch. “They didn’t say they paid unfair taxes based on income — they said it was based on their worth.”

He added, “How about the business owner or farmer who doesn’t have a lot of income but has a net worth going up — are they not paying enough because the value of their farmland went up? It’s a slippery slope.”

Under Mr. Biden’s plan, the top tax rate would rise to 39.6% for people earning $400,000 a year or more in taxable income, estimated to be fewer than 2% of U.S. households. The top tax rate that workers pay on salaries and wages now is 37%. The president is also proposing to nearly double the tax rate that high-earning Americans pay on profits from sales of stocks and other investments. In addition, under his proposals, inherited capital gains would no longer be tax-free.

“Biggest tax story of the year”

“I can confirm that there is an investigation with respect to the allegations that the source of the information in that article came from the Internal Revenue Service,” Rettig said at the start of a Senate Finance Committee hearing on the IRS’ budget. “Upon reviewing the article, appropriate contacts were made, which you would expect and the investigators will investigate.”

And as long as wealth isn’t “realized,” it avoids taxation — a perfectly legal strategy. For instance, Amazon CEO Jeff Bezos’ wealth has surged 57% to $177 billion in April 2021 compared with a year earlier, thanks to the jump in the value of his shares in his company. But unless he sells that Amazon stock, thereby “realizing” his gains, no taxes are due on that jump in wealth.

“Looks like the biggest tax story of the year, if not the decade,” wrote University of California at Berkeley economist Gabriel Zucman on Twitter about the ProPublica findings. “From public data it was always clear that the top billionaires don’t pay much tax … But even I am surprised at how low their effective tax rate is.”

Zucman, the economist behind Massachusetts Senator Elizabeth Warren’s wealth tax proposal, is known for an analysis of the U.S. tax system that found that the 400 richest Americans pay a total tax rate of about 23% — or lower than the bottom half of U.S. households, who pay a rate of about 24%.

“The punchline is that the U.S. tax system is severely regressive at the very top-end,” he added about the ProPublica report. “Which might not be totally optimal.”

How the rich are different: Loopholes

Underlying these discussions are questions about the fairness of the U.S. tax system. Most hourly or salaried workers don’t have access to the types of loopholes and tax avoidance techniques that the nation’s richest people employ to lower their tax rates, for instance.

The richest Americans have a bevy of techniques at their disposal to avoid taxes, the ProPublica report noted. To be sure, these techniques are legal, but the report raises questions about their fairness.

In 2011, Bezos reported that he lost money because his investment losses were larger than his income. That year, the Child Tax Credit in 2011 — designed to help middle-class families offset the cost of raising children — provided $1,000 for each child, as long as a married couple’s adjusted gross income was below $110,000. Bezos’ adjusted income was so low in 2011, he claimed and received a $4,000 tax credit for his four children. The value of Bezos’ wealth that year amounted to $18 billion.

Bezos isn’t alone in having an ultra-low true tax rate, according to the report. The 25 richest people in the U.S. saw their wealth rise by $401 billion from 2014 to 2018, but they paid $13.6 billion in federal income taxes. That equates to a true tax rate of 3.4%, ProPublica said.

The middle class, by comparison, pays a much higher true tax rate because they have lower wealth accumulation, ProPublica argued. They also don’t have the same ability to reduce their taxes as the rich through techniques like investment losses or write-offs.

“We do believe that every taxpayer should strive for paying the lowest tax liability they can by using the tax law as it exists,” Steber of Jackson Hewitt said. “I put forth it’s not only your right, it’s a heralded American tradition to do the best by yourself and your family.”

Sarah Ewall-Wice and The Associated Press contributed to this report.