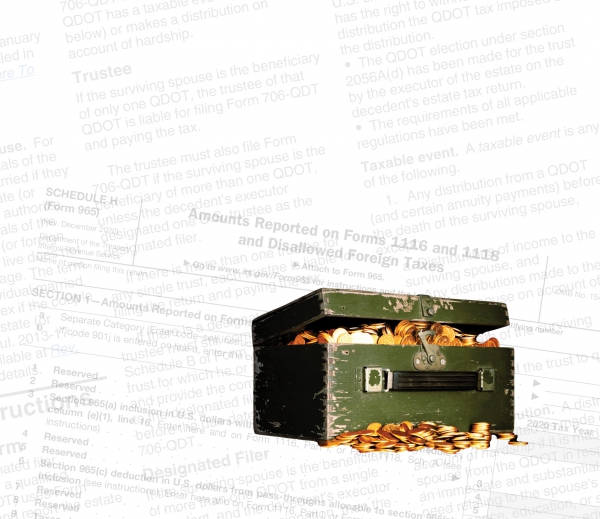 Around the world, as our nations attempt to get out from under this pandemic, a question looms: How can we pay for recovery?

And here in the U.S., nearly two-thirds of us now say we support a tax on extreme wealth, including the proposal introduced in Congress by Sen. Elizabeth Warren and Rep. Pramila Jayapal.

Critics, like billionaire investor Leon Cooperman, counter that if a wealth tax is passed, wealthy people will simply “rush to find ways of hiding their wealth.”

In fact, billionaires already hide their wealth. All told, trillions of the world’s privately owned treasure are hidden.

This is roughly 10 to 12 percent of the world’s wealth — a stunning figure.

This isn’t Uncle Joe with cash in his mattress. These are the wealthiest people on the planet, those with over $30 million and the estimated 2,500 global billionaires.

These “ultra high net worth” individuals are the people who can afford to hire what social scientists call the “wealth defense industry,” the veritable army of professional accountants, tax lawyers, wealth managers, and family office staffers who facilitate this global wealth vanishing act. They are paid millions to hide trillions.

The tools they deploy include an arsenal of complex trusts — including what some call “dynasty trusts” — to sequester wealth for future generations, with the goal of attaining a sort of multigenerational wealth immortality.

With one hand they’ll claim they’re “just obeying the law,” while with the other they’re actively writing the rules, blocking reforms, and lobbying to protect the interests of their extremely wealthy clients.

Across the Connecticut River in New Hampshire, these advocates for the super-wealthy lobbied the New Hampshire legislature to create a new ownership entity, anonymous civil law foundations (not a charitable entity), with the hope of attracting global billionaires to park their hidden wealth in the Granite State.

Every indication is that the amount of hidden wealth is accelerating. The U.S. estate tax — the country’s only levy on the accumulated wealth of the top 0.1 percent — is so porous that even a former Trump official quipped, “Only morons pay the estate tax.”

The number of family offices serving clans with over $250 million has mushroomed, rising from fewer than 1,000 in the 1980s to an estimated 10,000 globally today.

While family offices perform some of the more mundane wealth-management services, their core purpose is wealth preservation, tax reduction, and intergenerational succession — essentially, a dynasty-building mission.

There are three reasons we should be alarmed about rampant wealth hiding.

First, aggressive tax avoidance by the wealthy shifts tax obligations onto everyone else — or else creates the conditions for phony austerity and budget cuts. As the Biden administration and Congress debate how to pay for the last four years of Trump tax cuts for the wealthy and pandemic deficit spending, the hidden wealth system is enabling the very wealthy to opt out of their responsibility to chip in.

Second, it undercuts the global rule of law — and ultimately backfires on our own sovereignty and global credibility.

When you think of secretive global tax havens, you might imagine Swiss bank accounts or Cayman Islands shell corporations. But the truth is that the U.S. is now globally recognized as a tax haven in its own right.

Our anonymous Delaware limited liability companies and South Dakota dynasty trusts attract the wealth of foreign despots and kleptocrats. Many also launder billions through luxury real estate in the U.S., avoiding taxes while parking their treasure in a stable, regulated market.

Third, wealth hiding further concentrates wealth and power in a few hands, which is perilous for self-governing, democratic societies.

The pandemic has already supercharged America’s second gilded age. Over the last 14 months, the roughly 700 U.S. billionaires saw their combined wealth increase by $1.6 trillion, even as millions of their fellow citizens lost their lives and livelihoods.

As the French economist Thomas Piketty warned, unless the U.S. can reverse this trajectory, we’re on track to become a hereditary aristocracy of wealth — where the grandchildren of today’s billionaires will dominate our economy, politics, philanthropy, and culture.

As wealth and power concentrates, the cycle continues. The wealthy deploy their power to further shape the rules, news, and culture of society. They block popular reforms by capturing the political system and ensuring dysfunctional gridlock.

This leads to further consolidation of wealth dynasties, impervious to taxation and accountability. It also leads to further social breakdown and polarization, as our collective capacity to solve big problems — like responding to a pandemic or ecological disruption — is rendered inoperative.

For a county that was forged out of a rejection of feudalism, it may be hard to spot the telltale signs of a reassertion of feudalistic and monarchic norms. One component is what law professor Allison Tait describes as a culture of “high wealth exceptionalism,” where the wealthy believe they are entitled to a separate set of laws and rules governing them because of their wealth — and the rest of society tolerates this arrangement.

We can fix this. Lawmakers could shut down this hidden wealth apparatus overnight by outlawing particular trusts and loopholes, promoting ownership transparency, passing global trade treaties that prohibit offshore practices (and consign rebel states to economic-pariah status), and investing in robust enforcement.

The barrier to change isn’t just the super-wealthy, but the self-interested class of professional wealth hoarders at their employ. It is in their interest for the wealthy to create trusts that will live forever — and, of course, provide the wealth managers with a substantial cut.

The first step to reform is getting past our cultural tolerance for “billionaire exceptionalism.” The second is to appreciate that the wealth-defense industry thrives on complexity and opaqueness and to press lawmakers for transparency and simplicity instead.

Ask a trust attorney to explain a Grantor Retained Annuity Trust (GRAT), and I will give you two minutes to stay awake. Such financial instruments are purposeful obfuscation. A simple solution: outlaw all trusts except a few special-needs custodial arrangements for a publicly disclosed single beneficiary — and require an annual tax return for the trust. Now sit back and listen to the howls.

If four decades of mounting inequality and stagnating middle-class wages weren’t enough, the devastation of the last year should prove it: Inequality kills.

When you think about paying taxes on your modest salary this year, take a moment to think about the vast wealth that goes untaxed — and consider joining the movement to unmask it.

Editor’s note: Our terms of service require you to use your real names. We will remove anonymous or pseudonymous comments that come to our attention. We rely on our readers’ personal integrity to stand behind what they say; please do not write anything to someone that you wouldn’t say to his or her face without your needing to wear a ski mask while saying it. Thanks for doing your part to make your responses forceful, thoughtful, provocative, and civil. We also consider your comments for the letters column in the print newspaper.

Italian Supreme Courtroom Ruling on the Idea of Useful Possession

The Escambia Youngsters's Belief Board can’t vote till the governor appoints 5 further members:...