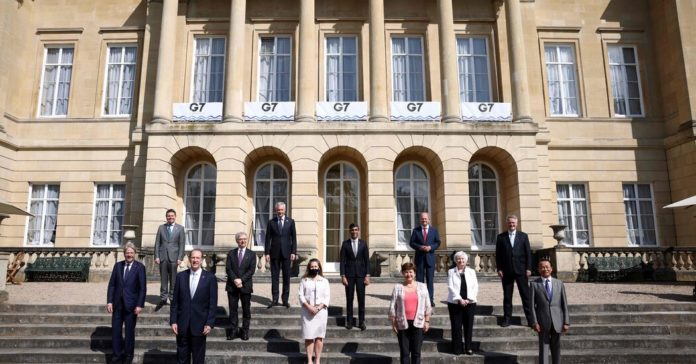 LONDON – The top economic officials from the world's advanced economies made a breakthrough on Saturday in their year-long efforts to revise international tax laws and unveiled a broad agreement aimed at preventing large multinational corporations from seeking and forcing tax havens to give more of their revenue to governments.

CFOs of the group of 7 countries agreed to support a new global minimum tax rate of at least 15 percent that companies would have to pay regardless of where their headquarters are located.

The deal would also impose an additional tax on some of the largest multinational corporations, potentially forcing tech giants like Amazon, Facebook, and Google, as well as other large global corporations, to pay taxes to countries based on where their goods or services are sold, independently whether they have a physical presence in this nation.

Officials described the pact as a historic deal that could reshape global trade and consolidate public finances, eroded after more than a year of fighting the coronavirus pandemic. The deal comes after several years of tense negotiations and, if entered into force, would reverse a race to the bottom on international tax rates. It would also settle a dispute between the United States and Europe over taxing large tech companies.

Rishi Sunak, the UK Chancellor of the Exchequer, announced the deal and welcomed it as a deal that would make the global tax system “fit for the global digital age” and ensure that “the right companies pay the right taxes in the right places”.

Although the agreement is a big step forward, many challenges remain. Next month the group of 7 countries will have to sell the concept to the finance ministers of the broader group of 20 nations that are gathering in Italy. If successful, officials hope a definitive agreement can be signed by the leaders of the Group of 20 when they meet again in October.

Getting wider support will not be easy. Ireland, which has a tax rate of 12.5 percent, has spoken out against the global minimum tax, arguing that it would disrupt its economic model. Some large countries like China have tacitly followed the proceedings, but it is assumed they will not participate. Tax officials believe that if enough advanced economies sign up, other countries will be forced to follow suit and plan to put political pressure on Ireland to join the deal.

The Biden administration was particularly keen to reach an agreement as a global minimum tax is closely tied to its plans to raise the corporate tax rate in the United States from 21 percent to 28 percent to pay for the president's infrastructure proposal.

Business lobbyists and Republican lawmakers have warned that it will make American companies less competitive than their international counterparts and lead to more offshoring.

Treasury Secretary Janet L. Yellen and other administrative officials said taxing other countries with a base tax rate on foreign profits would minimize any disadvantage for American companies and be less likely to relocate them to countries with lower taxes.

She described the agreement as "significant" and "unprecedented".

"This global minimum tax would end the race to the bottom in corporate taxation and ensure fairness for the middle class and working people in the US and around the world," she said in a statement. “The global minimum tax would also help the world economy thrive by creating a level playing field for businesses and encouraging countries to compete on positive foundations such as: B. the education and training of our workforce and investments in research and development as well as infrastructure. "

The group of 7 delegations representing the UK, Canada, France, Germany, Italy, Japan and the United States negotiated until late Friday to discuss details of how the new tax systems work and the language of the declaration.

France, which had pushed for a tax rate above 15 percent, wanted to make sure the tax remained flexible for a higher tax. The United States urged European countries to abolish their taxes on digital services, which the government believes are wrongly targeting American tech companies. France, Italy and the UK have refused to give up these taxes until the deal is finalized and in place – a process that can take up to four years.

The joint statement or communiqué published on Saturday indicated that the digital taxes would remain in place for the time being.

"We will ensure adequate coordination between the application of the new international tax rules and the elimination of all taxes on digital services and other relevant similar measures for all businesses," the statement said.

To prevent individual countries worldwide from imposing dozens of digital taxes, the agreement reached on Saturday would re-tax large companies with a profit margin of at least 10 percent. Finance ministers agreed that the tax should be applied to at least 20 percent of profits that exceed that 10 percent margin "for the largest and most profitable multinational corporations."

French Finance Minister Bruno Le Maire praised the deal as ambitious and said his country would continue to push for a global minimum tax rate of over 15 percent.

"This agreement will make it possible to tax the digital giants and for the first time to introduce a minimum tax rate for companies in order to combat tax dumping," he said on Saturday. "In the course of the talks, France will seek the highest possible minimum tax rate in order to end the race to the bottom in certain countries."

There are huge sums of money at stake. A report from the EU Tax Observatory earlier this month estimates that a minimum tax of 15 percent would bring in an additional 48 billion euros, or $ 58 billion per year. The Biden administration forecast in its budget last month that the new global minimum tax system could help bring the United States $ 500 billion in tax revenue over a decade.

The plan could face opposition from major corporations and the world's largest corporations began development on Saturday.

"We strongly support the work to update international tax regulations," said José Castañeda, a Google spokesman. "We hope the countries will continue to work together to ensure that a balanced and lasting deal is reached soon."

Nick Clegg, Facebook's vice president of global affairs, wrote on Twitter: "We want the international tax reform process to be successful, and we recognize that this could mean Facebook pays more taxes elsewhere."

Manal Corwin, a former Treasury Department official in the Obama administration who now heads national Washington tax practice at KPMG, said the agreement, released on Saturday, leaves many questions unanswered about the scope, which is relevant to which companies are covered . She pointed to the revenue threshold and whether companies need to segment lines of business when measuring margin and profit.

"Without answers to these open questions, it is difficult to determine which companies will get in or out," Corwin said.

The deal signaled a return to Comity in the Club of Wealthy Countries, which was shattered in recent years when the Trump administration imposed tariffs on American allies but has regained a foothold since President Biden took office. Last year, then Treasury Secretary Steven Mnuchin broke off talks after negotiations over digital taxes stalled and President Donald J. Trump prepared retaliatory tariffs against countries that wanted to tax American tech companies.

Negotiations picked up speed again this year after Ms. Yellen made new proposals that successfully broke the deadlock. She proposed a global minimum tax rate of at least 15 percent and suggested replacing European taxes on digital services with a new levy on the 100 largest companies in the world based on where a company sells its goods or services, independently whether there is also a physical presence in these countries.

"Let's be clear, we have someone with whom it is easy to discuss, compromise and easily bridge some gaps between different nations," he said.

Ms. Yellen said the success of the meeting was a sign that the days of America First were over.

"I think what you are seeing is a revival of multilateralism," she said.

Mathias Cormann, Secretary General of the Organization for Economic Cooperation and Development, said the agreement was a crucial step towards wider global acceptance of a minimum tax.

"There are still important tasks to be done," he said in a statement. "But this decision gives important impetus to the upcoming discussions between the 139 member countries and jurisdictions."

Despite the breakthrough, if countries keep their taxes on digital services, reaching such a comprehensive deal will not be easy and the risk of a trade war will remain. The Biden government said this month that it is ready to impose tariffs on approximately $ 2.1 billion worth of goods from Austria, the UK, India, Italy, Spain and Turkey in retaliation for its digital taxes. However, it keeps them on hold as the tax negotiations evolve.

Conclusion of such a large deal by the end of the year might be too optimistic given the number of parts and countries involved.

"A detailed agreement on something of this complexity in a few months would be the speed of light," said Nathan Sheets, a former treasury secretary under the Obama administration's secretary for international affairs.

The biggest obstacle to closing a deal could come from the US. The Biden administration must seek the approval of a narrowly divided Congress to make changes to the tax law, and Republicans have shown opposition to Mr Biden's plans. American corporations will bear the brunt of the new taxes, and Republican lawmakers have argued that the White House is ceding tax sovereignty to overseas.

"When the US corporate tax rate is 28 percent and the global tax rate is only half that, you can guarantee that we will see a second wave of US investment research production overseas, that's not what we want," said Brady said.

At the press conference, Ms. Yellen noted that leading Democrats in the House and Senate had expressed support for the tax changes the Biden administration wanted to make.

"We will work with Congress," she said.

Pending Felony and Civil Circumstances In opposition to Donald Trump

Intuit is updating its full fiscal yr and second quarter outlook to mirror the...