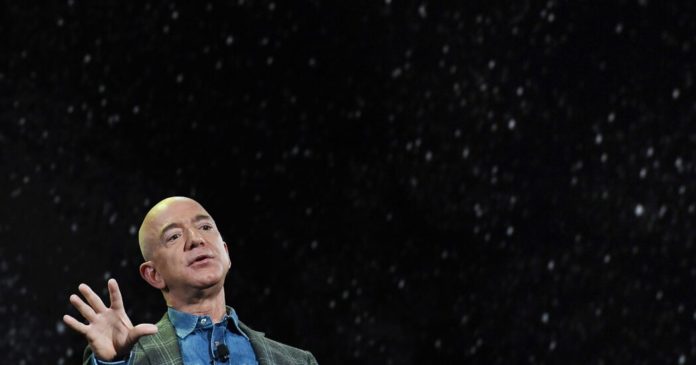 WASHINGTON — A jaw-dropping report by ProPublica detailing how America’s richest men avoided paying taxes has intensified interest in Congress, even among some Republicans, in changing the tax code to ensure that people like Jeff Bezos and Warren Buffett pay their fair share.

For Republicans, the idea that the tax code should give preferential treatment to investment has been sacrosanct, ostensibly to promote economic growth and innovation that could benefit everyone. But the news this week showed how the treatment of stocks, bonds, real estate and huge loans taken off those assets has sent the tax bills of the richest Americans plummeting.

“My intention as the author of the 2017 tax reform was not that multibillionaires ought to pay no taxes,” said Senator Patrick J. Toomey, Republican of Pennsylvania, who helped write the law that slashed taxes by more than $1 trillion. “I believe dividends and capital gains should be taxed at a lower rate, but certainly not zero.”

Democrats, especially in the Senate, have been hard at work on a tax package to finance President Biden’s costly domestic agenda, including a major infrastructure plan, climate change measures and the expansion of education and health care benefits. Much of that work — vehemently opposed by Republicans — has been focused on clawing back tax cuts lavished on corporations by the 2017 tax law, President Donald J. Trump’s signature legislative achievement, and to prevent multinational corporations from shifting taxable profits offshore.

The ProPublica report, analyzing a trove of documents detailing the tax bills of household names such as Mr. Bezos, Mr. Buffett, Elon Musk and Michael Bloomberg, showed that the nation’s richest executives paid just a fraction of their wealth in taxes — $13.6 billion in federal income taxes during a time period when their collective net worth increased by $401 billion, according to a tabulation by Forbes.

The United States taxes people based on their income and investment gains, not according to their net worth. But ProPublica calculated that after all the fancy accounting work, the 25 richest Americans paid what it called a “true tax rate” — the proportion of their total wealth paid in taxes — of only 3.4 percent. That is a tiny fraction of the amount that affluent Americans are supposed to pay in income taxes — 37 percent — or the 20 percent most pay on proceeds from asset sales.

In some years, they paid no taxes at all.

In 2007, Mr. Bezos, the chief executive of Amazon and the world’s richest man, paid no federal income taxes even as his company’s stock price doubled. Four years later, as his wealth swelled to $18 billion, Mr. Bezos reported losses and even claimed — and received — a tax credit of $4,000 for the care of his children, according to ProPublica, whose report was based on leaked data from the I.R.S.

“Americans knew that billionaires played these kinds of games,” Senator Ron Wyden of Oregon, the chairman of the tax-writing Finance Committee, said on Wednesday. “What was significant yesterday was it was all laid out in stark detail about the most affluent people in America.”

He said he was working on an array of proposals to get at the issue, possibly including a return to some kind of minimum tax, and would soon unveil specific proposals.

“Billionaires are going to have to pay their fair share, every year,” he said.

The ProPublica revelations got to a widely understood issue: that the superrich earn virtually all their wealth from the constantly rising value of their assets, particularly in the stock market, and that the sales of those assets are taxed at a lower rate than ordinary income from a paycheck, a point that Mr. Buffett often makes.

But the analysis also revealed a less recognized strategy employed by the superrich: taking huge loans, using their assets as collateral. It allows them to avoid selling their assets and facing taxation, and even to write off some lending costs. In that way, Mr. Bezos and Mr. Buffett were able to show yearly income losses even as their wealth grew by billions of dollars.

Those kinds of tricks, perfectly legal under the tax code, would be unaffected by some of Mr. Biden’s proposals, such as increasing the top marginal income tax rate to 39.6 percent from 37 percent and taxing capital gains at income tax rates for people who earn more than $1 million a year. Such proposals still rely on paychecks that the superrich largely eschew and the sales of assets they typically avoid.

The details of the report may bolster the cause of a wealth tax, pushed by Senator Elizabeth Warren, Democrat of Massachusetts, who has proposed a 2 percent tax on an individual’s net worth above $50 million — including the value of stocks, houses, boats and anything else a person owns, after subtracting any debts.

“Americans know that the game has been rigged for those at the top,” Ms. Warren said, “but they rarely get their faces pushed in it the way that these tax returns emphasize how many billionaires pay nothing while American families are struggling.”

Mr. Wyden said he was also examining the approach. The rescinded alternative minimum tax was once intended to make sure the rich paid some significant amount and kicked in as a parallel system once taxpayers claimed a certain number of deductions.

But Mr. Wyden said it was devised to target high income, not high wealth, and ended up letting the richest of the rich skate free. He said he would act to close the so-called carried-interest loophole, which allows many hedge fund and private equity managers to declare income fees as capital gains from their clients and pay a far lower rate on them.

“We need to be more aggressive,” said Senator Sherrod Brown, Democrat of Ohio and a member of the Finance Committee. “The whole Republican message has been: ‘Pay less taxes, have more economic growth.’” He added, “They’ve had their way for too long, and we haven’t had enough Democrats that have wanted to stand up to it.”

Most Republicans are not changing their positions. Senator Charles E. Grassley of Iowa, a senior Republican on the Finance Committee who once aggressively went after tax avoidance, said he was most outraged not by the content of the ProPublica report but by the fact that so much private tax data had leaked.

His concern was that any effort to tax the value of assets before their sale would hit farms and privately held businesses. Taxing the capital gains of the superrich as income, he said, “would retard investment, which creates jobs.”

Mr. Toomey, another committee member, was more open, though he said he wanted to make sure the ProPublica report was accurate and that he understood the mechanics of the tax avoidance before latching onto a blunt instrument like a new alternative minimum tax.

“I’d rather try to understand if it’s true, what the dynamic is that makes it true and to do something about it,” he said.

Senate Democrats are already at work on a suite of tax proposals that would be paired with infrastructure spending, either in a bipartisan deal or a go-it-alone Democratic bill that would have to pass through a budget process called reconciliation. They include a package of energy tax credits and a plan targeting multinational tax avoidance.

The Democrats’ approach to individual taxation is likely to stem from a 33-page plan aimed at converting wealth to income for the purpose of taxation. Instead of taxing only when assets are sold, taxpayers with incomes of $1 million and assets worth $10 million would have to pay taxes on the gains of some of their assets each year. The transfer of some assets, especially stocks, say, from wealthy parent to child, would be considered a sale and taxed accordingly to prevent wealth moving from generation to generation without taxation.

Those income cutoffs, set in 2018, are likely to be higher; but the aim will be the same.

“A tax on that stock gets us started on a wealth tax that begins to equalize the burden on all Americans,” Ms. Warren said. “From there, we can include a tax on other forms of wealth, including real estate, jets, yachts, paintings. That stuff gets valued for insurance purposes every year.”

Some protections would be conferred on primary residences, family farms and retirement accounts.

Democrats also want to beef up the I.R.S. budget to crack down on cheating. And they want to strengthen the tax on inherited estates by fixing the price of inheritances at their value when a wealthy person dies, not the value when the asset was bought.