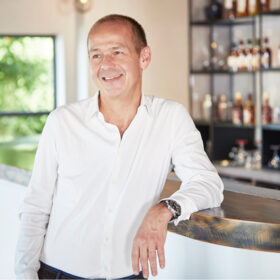 According to Pernod Ricard's Jean-Christophe Coutures, the Scottish whiskey sector needs stronger government support to recover from the effects of Covid-19 and transatlantic tariffs.

Jean-Christophe Coutures is Chairman and CEO of Chivas Brothers

Following the release of Pernod Ricard's half-year results, Coutures, chairman and CEO of the Scottish whiskey arm Chivas Brothers, said the group would "strongly seek government support" in the next budget. The UK budget is due to take place on March 3rd.

Chivas Brothers organic sales declined 10% in the second half of 2020, with declines seen in markets such as France, Spain and South Africa.

The Scottish whiskey industry has been rocked by the effects of the coronavirus pandemic and tariffs imposed by the US. Scotch whiskey exports fell by £ 1.1 billion (US $ 1.5 billion) in 2020, to their lowest level in a decade, according to the Scotch Whiskey Association (SWA) trade organization.

Coutures said: “We are strongly asking for government support, particularly for an excise tax (cut) in the next budget to support Scottish industry.

“It suffered really significant export losses in 2020, the SWA will publish the numbers and you will see that our industry has been absolutely impressed by the Covid context and the increase in import duties in the US.

“This is an industry that has suffered twice – once from its export business and second from the closure of its visitor centers. It is a very large and sizeable industry in the UK that really needs assistance in cutting excise duties. "

The SWA has also issued calls for greater support for distillers, which, according to SWA Managing Director Karen Betts, "would mitigate the damage to Scotch whiskey and help reassure distillers that the UK government is willing to support Scotch whiskey".

Despite the challenges facing the sector, Coutures also highlighted the opportunity to revitalize Scottish industry by improving trade ties. He pointed to the possibility of better relations with the US and the ability of the UK government to develop new free trade agreements with countries like Australia and India.

He said: “The second important element is to prioritize the tariff expansion in the US in order to restart exports of single malt to this market. Yes, Glenlivet is doing well, but when you look at the whole industry and especially the small businesses, they are suffering in all of their export deals to the US.

“I am very positive about the agenda the government has put on their FTA agenda to crack a deal with New Zealand and Australia. And it is very important for us as an industry to manage and secure a free trade agreement with India, one of the largest Scottish whiskey markets in the world with great potential. "