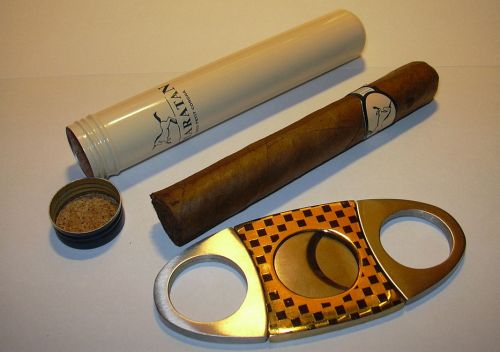 An obscure provision in the state Senate tax package that would change the excise tax on cigars has a supporter in Sen. Todd Johnson, a member of the chamber’s Finance Committee and a cigar store owner.

The provision would cap the excise tax on individual cigars at 30 cents and expand the tax to online cigar purchases.

North Carolina current has a 12.85% tax on cigars with no cap. According to the bill’s supporting documents, the proposed change would “phase out the tax on amounts paid by a dealer in excess of $2.35 per cigar,” with the impact landing on more expensive “premium or hand-rolled, cigars,” rather than less expensive, machine-made cigars that are “unlikely to hit the cap.”

Even with the cap, the change is expected to bring in more state revenue because taxes would apply to cigars bought online. In the next fiscal year, the cigar tax would generate an additional $3.7 million; in five years, it would bring in an additional $12.4 million, according to the fiscal analysis accompanying the bill.

In an interview last week, Johnson, a Republican from Union County, said he did not have a conflict of interest in working on or voting for the bill because it applies to all cigar sellers, not only to his shops. “There’s countless different cigar vendors in the state,” Johnson said. “There will be no personal thing to me. I’m just an advocate for the industry. I believe in the industry. I think that we provide a good service.”

Johnson and his family own also Johnson Insurance Management, an insurance company. He said the cigar business is a sideline for him.

It’s important to have elected officials with professional expertise and real-world knowledge vet proposed policies, he said. People handling the policy should not be those “off in a white tower,” who “don’t really understand the ramifications of the changes that they’re making,” he said.

In a follow-up email, Johnson said he would seek advice about voting on the bill.

“I intend to speak with State Ethics to get a formal opinion to be on the safe side before making that decision. There is no financial gain that will be realized in this legislation personally, and in actuality, it could potentially be the opposite as we operate a website that is not based in NC and we ship into NC,” he wrote. “Our website is held to the same standards as all other outside websites, which would place our website on an even playing field with NC brick and mortars. It’s simply sound finance policy and the right thing to do.

“My initial inquiries to folks that fully understand ethics policy is that this provision does not benefit me personally and applies equally to all folks that sell cigars in NC.”

Sen. Paul Newton, co-chairman of the Senate Finance Committee who is shepherding the bill through committee hearings, referred questions about the cigar excise tax to Johnson, calling him “the expert.”

Newton agreed that under ethics rules, it would not be a conflict for Johnson to vote for the tax package, but it would be Johnson’s choice.

Jane Pinsky, director of the NC Coalition for Lobbying and Government Reform, said Johnson’s vote would be allowed under the rules, but also expressed concern.

“If it treats all cigar shops the same way, that is within the letter of the law,” she said. “Within the spirit of the law, I would hope that he does not vote on the bill.” Trust in government has eroded in the 20 years since the state passed a groundbreaking set of state ethics laws, Pinsky said.

“I think it is incumbent upon the legislature to help restore that trust,” Pinsky said. “I think most people are in the General Assembly for the right reasons. They believe in what they’re doing.

“Our system of government depends on the full faith of the people. Everything the legislature can do to maintain that full faith is important.”

She referred to former Republican Rep. Paul Stam’s decision not to vote on a budget because his wife’s family was going to get some money from the state Department of Transportation for land as “the gold standard.”

It is not uncommon in North Carolina for legislators to work on or vote for legislation that would benefit their businesses or industries.

Among the best documented examples is former House Speaker Jim Black, a Democrat and optometrist, slipping a requirement into the state budget that required all children to get full eye exams before they entered kindergarten.

Former state lawmaker Wendell H. Murphy of Murphy Farms co-sponsored and voted for bills during his 10 years in the legislature that helped the hog industry.

In the interview, Johnson said the proposal’s advantages include taxing cigars purchased online, which are currently not taxed. And the proposed cap would make excise taxes on cigars lower than they are in border states. South Carolina has a tax of 5% of the manufacturer’s price; Tennessee has a tax of 6.6% of the wholesale cost price.

Johnson said he has a shop in Aberdeen, a town in Moore County. He also has a shop in Indian Trail in Union County, about 35 miles from Rock Hill, S.C. In the interview, Johnson said he didn’t expect that the tax package would benefit his shops. He said he didn’t think that people are bypassing his Indian Trail store to save 20 cents on a cigar purchased across the state line.

Consumers do, however, cross state borders to buy low-tax cigars. New Jersey state assemblyman Brian Bergen proposed lowering that state’s excise tax on cigars last year because residents drive to buy them in Pennsylvania, a state with no excise tax on premium cigars. In a press release, Bergen referenced a study that found at least 200 premium cigar shops in Pennsylvania near the New Jersey border.

Nathan C. Goldman, assistant professor of accounting at N.C. State University’s Poole College of Management, said in an email that the cap would benefit both cigar sellers and buyers. Brick and mortar shops in North Carolina would be more competitive compared with those in South Carolina, for example, Goldman wrote. Cigar smokers would benefit from lower prices.

“Prior studies tend to show that the costs of taxes are more incurred by the buyer than the retailer,” Goldman wrote.

North Carolina is part of a national effort to tax online cigar purchases, said Mark Triplett, a Virginia consultant who works on tobacco tax statues and has worked with the nonprofit Federation of Tax Administrators. He has met with officials from more than a dozen states regarding online tax collection on behalf of a premium cigar coalition. The cigar section of the North Carolina bill is based on model legislation passed in Maryland a few years ago, Triplett said.

The 2018 U.S. Supreme Court decision South Dakota vs. Wayfair ruled that states can require businesses to report and pay sales taxes even if they don’t have a physical presence in the state.

“These people are looking for as much uniformity as they can get from state to state,” Triplett said.